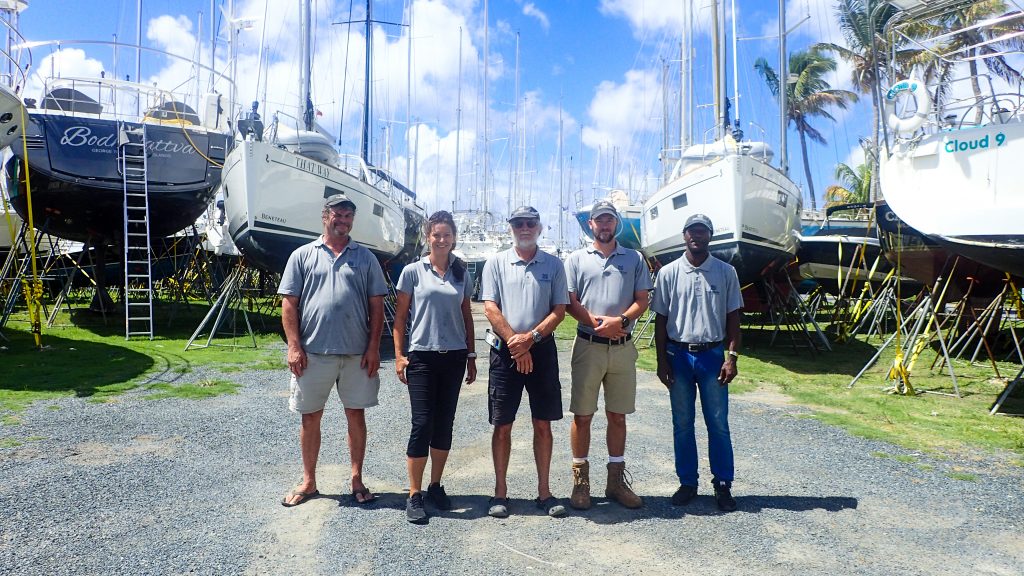 Meet our Surveyors and staff 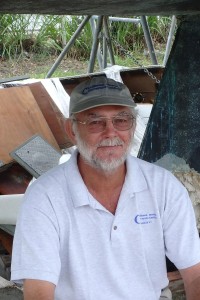 MECAL Certifying Authority 2008 to present designated A1 and C1`

I have been working full time as a Yacht and Small Craft Surveyor in the Caribbean since 1995. 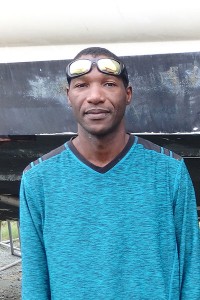 I was born in Tortola British Virgin Islands in 1975, but migrated to the Island of St. Vincent & the Grenadines, where i obtained both my primary and secondary level education. There, i developed a liking for reading and a passion for poetry. In 2005, I published my book of poetry: “The Uncertainty of Time”, which received an impressive book review here in the British Virgin Islands.

Apart from writing, my talent for Lawn Tennis has allowed me to travel to many parts of the Caribbean, North & South America, and Europe, as a Semi-Professional Player. In addition, in 2003 I went on to become the Director, and coach of the Under 14 Youth Development Tennis Programme, in the British Virgin Islands. I’m still actively involved in the tennis world, as I continue to participate in local and regional tennis tournaments.

In 2011 I obtained a degree in Business Administration, at the H. Lavity Stoutt Community College. 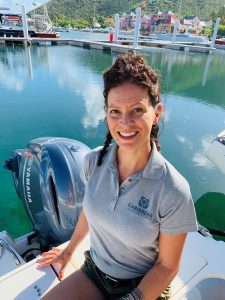 Born on the small island of Jersey, UK, Anna grew up loving the sea. Having graduated with a Marine Engineering and Naval Architecture degree in the ‘noughties’ when everyone wanted in on the tech bubble, she redirected her engineering skills into business consulting. While enjoyable, she missed the marine world. Swapping business suits for boiler suits she re-focused back to marine, working on large shipbuilding projects in South Korea, Japan, Turkey and the US as a health, safety and environmental engineer in the energy sector.

Seeking a change of pace from the corporate world Anna went back to Uni to study Marine Science, Policy and Law. After a stint working for the UK Government in environmental policy and offshore renewables, she decided she wanted to spend less time in the office and more time on the ocean. Anna moved to the BVI in 2014 to enjoy warm water sailing, kiteboarding and SCUBA diving.

Before joining the CMS team, Anna captained a busy watersports charter yacht, implementing an onboard environmental programme; the first of its kind in the BVI. Anna continues her environmental work through local NPO Green VI helping charter yacht companies ‘green’ their operations.

Anna is a detail orientated professional engineer with over 20 years of marine sector experience ranging from 30ft fiberglass boats to 300m LNG carriers. She sees each boat as having a story. Combining this with careful attention to what a client needs is why Anna finds the role of a surveyor so intriguing and rewarding.

DOB:
Younger than the average surveyor from what I’ve seen! 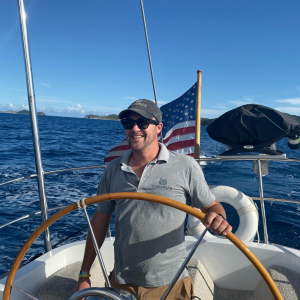 ANDREW BALL Andrew was born in France, spending his childhood in England, and his secondary school and university years Canada. He studied a BFA in Technical Theatre, and later a BComm in Business Management. After university education in Toronto, Canada, Andrew went back to the UK to pursue a career in the maritime industry. After completing his MCA 200 ton Master’s license, he found himself traveling through the western Mediterranean and then on to the Caribbean whilst also pursuing an FdSc in Operational Yacht Science. Among his recreational and commercial operating qualifications are PADI DiveMaster, RYA Powerboat II , RYA Diesel engine, GMDSS, STCW, and others.

While passing through the British Virgin Islands in 2009, he was asked to run a few charters for a local charter company and made the BVI his home. After working with numerous charter companies, he found a private yacht with a great owner and spent six years running charters throughout the Caribbean and US East Coast.

Eventually, Andrew felt that it was time to become a little more land-based and put down some roots. It was at this point he joined a Caribbean engine and power generation distributor as their Service Manager (representing brands such as Yanmar, Volvo Penta, Kubota, Perkins, Northern Lights, Cummins/Onan, Dometic, JCB, John Deere, ZF Hurth, and others), however this just wasn’t quite close enough to his passion; boats.

Finally, Andrew joined Caribbean Marine Surveyors in early 2016. While still occasionally filling in as a relief Captain for large yachts to keep his feet wet, Andrew performs purchase, insurance, and stability surveys, among others throughout the Caribbean from Panama to Florida.

The majority of Andrew’s work involves damage surveys, claim management, loss adjustment, and accident investigation. He also has significant experience in Catastrophe Response, leading assessment teams in the field in the BVI after Hurricanes Irma and Maria in 2017 and Hurricane Dorian in the Bahamas in 2019.

New build projects are one of Andrew’s many passions. He enjoys bringing his collective knowledge of a wide variety of vessels and designs, combined with his extensive operating experience, together to give new builds improvement. This takes him far and beyond the Caribbean, most recently and most often to the Sunreef Catamarans factory in Poland, where he has worked on multiple new build projects.

Andrew is empowered to conduct surveys such as SCV and tonnage surveys for the MCA through MECAL and is also a QI for the Marshall Islands Shipping Registry. He performs inspections and measurements for other flag states and registries on a case-by-case appointment basis.

Andrew is currently the Vice Chairman of the Marine Association of the BVI and spends much of his spare time helping to shape legislation regarding the BVI Marine Industry and assisting the industry to give back to the community.

When not busy volunteering in other areas, Andrew is also a crew member and emergency responder for Virgin Islands Search and Rescue, the marine rescue agency in the BVI, and has been since 2012.

Andrew is also a member of the Society of Accredited Marine Surveyors and the International Association of Marine Investigators.

Send Andrew an email and see how he can help you today.

About:
Born in France, spending his childhood in England, and growing up in Canada, it is not an easy for Andrew to come up with an answer when you ask him where he is from.
After completing university in Toronto, Canada, Andrew went back to the UK to pursue a career in the yachting industry. After completing his MCA 200 ton Master’s license, he found himself traveling through the Mediterranean and then over the Caribbean.
Andrew was passing through the BVI in 2009 when he was asked to run a few charters for a local charter company and never left. After working with numerous charter companies, he found a private yacht with the right owner and spent five years running charters throughout the Caribbean and US East Coast.
Eventually, Andrew felt that it was time to become a little more land-based and put down some roots. It was at this point he joined a Caribbean engine and power generation distributor as their Service Manager, however this just wasn’t quite close enough to his passion; boats.
Finally, Andrew joined Caribbean Marine Surveyors in 2016. 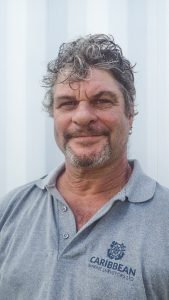